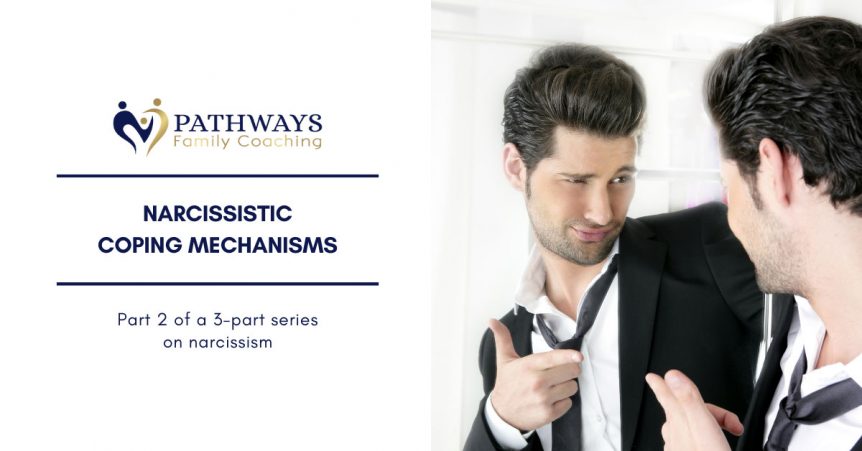 Okay…I know this post is way late, but if you follow Pathways on Facebook, you probably already know why…that’s right!  I’ve teamed up with the amazing Jenna Noble!  We now co-own the business, and have been working feverishly to develop amazing programs and resources for parents who are facing the rejection of a child…either partially or full-on for years.

Last June, I decided to take a deep dive into NPD, or narcissistic personality disorder.  In fact, I decided to dive so deep that I started creating a 3 part blog series!  Well, I’ve already updated the first part, and now parts 2 and 3 are even better that two heads are involved!  So…here we are together picking up from where I left off…

NPD is one of four cluster B personality disorders, as outlined in the DSM, and many parents responsible for manipulating their children into rejecting the other parent present with at least some of the symptoms of this disorder.

In Part 1 of this series, we reviewed the 9 different types of narcissists, the causes of NPD and warning signs that you may be dealing with a narcissist.  Today, we’ll be delving into the many coping mechanisms that narcissists utilize to protect their fragile egos.

Toxic people, such as narcissists, use a variety of dysfunctional coping mechanisms to feed their insatiable hunger for the emotional destruction of another.  You’ll want to watch out for the following common tactics they use so you can more quickly identify when you might be “under the spell” of a narcissist:

Before a narcissist can use the more manipulative “tools” from their belt, they must first earn your trust and admiration.  They do this by love-bombing their prey.

What is love-bombing anyway?  I mean, really…it sounds like a positive thing, doesn’t it?  Well, according to Psychology Today, love-bombing is the practice of “overwhelming someone with signs of adoration and attraction…designed to manipulate them into spending more time with the bomber.”

Let’s just slow it down for a second and highlight the really important part of that definition that differentiates love-bombing from genuine affection…that is the intent to manipulate.  Ultimately, love-bombing is not authentic…it is a rouse to earn your trust.  And once they’ve gained your trust, they are in control!

What makes this technique so scary is that it occurs right at the beginning of your relationship with the narcissist, and it can be incredibly hard to tell if the person is bombing you or if they are being genuine.  Add this uncertainty to the rush you get from receiving the affections, and love-bombing can become virtually undetectable.

So…how do you really know if you’re being love-bombed?  To better understand, let’s first take a quick look from the perspective of the bomber.  During this phase of your relationship, the bomber becomes laser-focused on you.  They study what you like and mirror your deepest needs and desires.  You become the center of their world, they perch you atop a pedestal, and go above and beyond to make you feel truly special.  In reality, they are really grooming you to become addicted to their attention so you deepen your investment in them.

At the end of the day, if you are being love-bombed, it is not going to last forever.  Once the narcissist gets what they need, namely your trust, they will pull the rug right out from under you and move on to other manipulative tactics to use you to satisfy their own lack of self-worth.

Do you remember when they used to use those old movie projectors in the movie theaters?  Projection is the same kind of thing with the narcissist being the movie projector and you being the screen.  The narcissist will do ANYTHING to avoid taking ownership of their own negative behaviors and traits, and will displace them onto someone else.  They will literally do something and say that someone else did it…a tactic you’re probably all too familiar with if you’re reading this post.

I actually had a psychologist tell me (during an evaluation) that my ex was saying that I was doing to him everything I was saying he was doing to me.  So, I asked her how she knew who was telling the truth and her answer terrified me…she replied with, “you both are.”  Incidentally, she was the one who got it right, but that’s a story for another day.

The scary thing is that not only will the narcissist fail to acknowledge their own flaws, they will typically project their own inadequacies onto you in a painful and cruel way.

Have you ever heard of word salad?  Word salad is kinda like watching a dog chase its tail, with the narcissist being the dog and their words being the tail.  They continually talk in circles and the conversation quickly becomes a nonsensical conversation from hell.  You may ask a question, and the response is about something completely different in an effort to deflect the conversation, change the subject, and cause you to forget about what you were originally talking about.

Narcissists love to use this tactic in an effort to confuse, frustrate, and distract from the original question or problem.  Spending just 15 minutes arguing with a narcissist may just leave you feeling like you’ve lost your mind and wondering how the conversation even started.  The goal…to keep changing the subject to evade having to accept accountability.

Ever watch the Twilight Zone?  Remember the rings of circles that make your eyes go all wonky?  Apply that to your words, thought and actions so they favor my perspective, and I’ve just turned into a narcissist.  Okay, not really, but you get the point.  A narcissist will weave damaging and elaborate webs based on partial truths, all with utter and complete confidence, convincing others that they are spouting facts.

There are actually many ways that they will distort reality to suit their needs:

“I seriously wonder how many highly intuitive, intelligent and totally sane women and men have been labelled as crazy because they got too close to figuring out someone else’s bullshit.”

The term “gaslighting” was originally coined from the 1944 film, Gaslight, where the protagonist’s husband slowly manipulated her into believing that she was going crazy.  In the play, the husband uses the gas lights in an upstairs apartment to dim the lights in his own suite.  The wife notices the dimming lights, and when she mentions it as a concern, the husband denies that it is happening and convinces her that she is imagining it.

Gaslighting is insidiously manipulative and ultimately leaves the victim confused and doubting their own sanity.  A person who has been gaslit for a prolonged period of time often feels that their grip on reality is precarious, and they have lost the ability to trust themselves.  Trust me…I know this!  I have experienced it first-hand, and it takes a long time to start trusting yourself and your own perceptions again.

There are several different tactics that a toxic person (a.k.a. a narcissist) may use to gaslight you:

In fact, gaslighting is so commonly used and insidious, we feel it necessary to share the following video about it:

Let’s step back into high school for a moment.  Remember when Chad cheated on Sally?  And what did Sally do?  …she went on a rampage to all of her friends telling them all these horrible things about Chad.  All her girlfriends bought into her exaggerations and pretty soon Chad was sitting by himself in the cafeteria at lunch.

THAT is triangulation…when someone seeks to convince or impose their opinion or perspective on another person in order to gain their support and harm a third person.  Narcissists are emotionally immature, so yes…it can kinda feel like you’re right back in high school when around them.

The really sad part is that a lot of grown adults will not think critically and accept their lies as truth because they really are that convincing.  It is common for an alienating parent to share their opinions and made-up plights with friends, family, teachers, coaches, professionals and other community members in an effort to turn them against their co-parent  (that would likely be you if you’re reading this…and I totally feel your pain!)  Unfortunately, this leaves you being judged and isolated with no opportunity to even defend yourself.  And worse yet…the people being triangulated end up validating the narcissist’s abuse, while simultaneously invalidating the target’s reactions.

Splitting can be simply defined as “all-or-nothing” thinking.  A person who splits views the world in extremes and from two perspectives…”all good” or “all bad”.  Everything is perceived as “black” or “white” with no room for shades of grey.  They also tend to judge people as being their “savior” or their “enemy”.

So, how exactly does one navigate a relationship with a narcissist? Our immediate answer would be…don’t if you can avoid it. Seriously…RUN! RUN FOR THE HILLS!

Being in a relationship with a narcissist adds a whole new meaning to Pat Benatar’s song “Love is a Battlefield”.  Narcissists are a human version of a chameleon with the ability to quickly assess a room and tailor their behavior to best suit their needs. They can be extremely charming, personable, and easily win others’ affections; however, they show a completely different side to themselves only to certain people.

Their end game is always to control others and about what’s in it for them.  They will be exceedingly sweet and cooperative when they want something, only to pull the rug right out from under you once they’ve accomplished what they set out to do.

BUT…what if you have no choice? What if the Narcissist is your parent, sibling, or worse…your co-parent? How exactly can you navigate a co-parenting relationship with a narcissist?  The truth of the matter is that you can’t co-parent with a narcissist, plain and simple.  The only option you have is to parallel parent, in which you parent your children separate and apart from your co-parent, AND teach your children the critical thinking skills they need to be able to resist the emotional poison from their other parent.

General guidelines to follow when parallel parenting with a narcissist include:

For the most comprehensive co-parenting plan on the market, check out the Pathways Ultimate Co-Parenting Plan. It’s jam-packed with 40 pages of easy-to-read language and designed to protect parent-child bonds and avoid contentious issues before they arise.

This being said, it is also important to maintain a certain level of careful compassion for those who have been diagnosed with this personality disorder, or display some of the traits.  As stated in our previous blog post, people develop these traits as a defense against trauma they have experienced in their lives.

Courtney Ackerman, Cognitive Distortions: When Your Brain Lies to You, PostivePsychology.com, September 29, 2017

Download the most comprehensive co-parenting plan on the market! This done-for-you comprehensive template is designed to protect parent-child bonds and avoid contentious issues before they arise.

Learn everything you need to know…

...about high-conflict divorce, the resulting dynamic in your family, and what you can do about it! Delivered to your inbox every month.